A human being is a story telling machine, self is the story.

Under a hot white August sky
I was sitting on my new sister-in-law’s
deck
looking out over a ravine
savoring my first cup of coffee
and three hours time difference
calling what I was doing “meditating”
which meant that nobody would bother
me
when a coyote appeared
ambling up a path out of the ravine
in my general direction.

A rabbit popped out of the brush
between us
saw the coyote
nothing between them but fast lane
froze into his clump of brown grass
imitation.

Coyote stopped too although he gave
no indication he had seen the rabbit.

On a heavy day, with large and many waves,
it’s easy to waste all your strength
getting out to where they’re breaking.
Don’t make this mistake.
As you work your way out
through the maelstrom of the broken waves,
don’t let them strike you.
For they will drive you backward,
and when you reach the surf-line—
if you do— you’ll be exhausted,
unequal to the task awaiting you.
Instead, play porpoise. As the broken wave
approaches, dive in front of it, just deep
enough for your hands to reach the bottom.
Dig your fingers in the sand and hold
until the wave is past, then push up quickly,
lest another wave be bearing down.
In that event, and no time to dive,
take a quick breath and duck your head
completely down before the leading edge of foam. 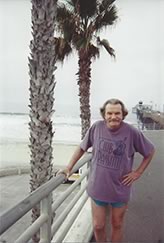 Jack and Carol vacationed in California each year. Jack went body surfing during the day and performed poetry at night in the many CA venues. He said, “Life doesn’t get better than this.” 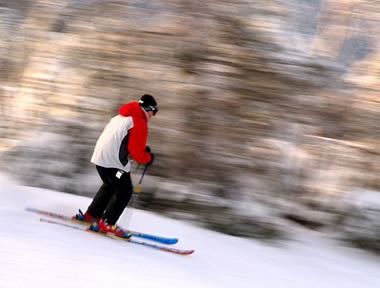 My dad was born in South Boston. His heart was always in New England. Some of my fondest memories with my father are of cross-country skiing. Train tracks, frozen rivers, open fields – these were the places he’d seek out anytime there was freshly fallen snow. Jack loved free activities, especially ones that yielded some return – in this case, the ability to create your own warmth on even the coldest days of the year. Not only was it low cost, but it was low impact and, although it didn’t feel that way when the ice would thunder under our skis as it settled on those frozen rivers, low risk as well.

The Cantab was home base for Jack in New England. He might have discovered the open mike down the street but the Cantab is where he came to own it. He said it was the best audience in the country – and that audience sure loved him. Jack was a celebrity there. When he’d read, the only sound beyond his voice was the rumbling of the red line underneath. Even the bartenders seemed to stop to listen to him.

For my wife Carol,
the woman who drives me to Poetry

The Quincy AA Group
liked to let Charlie drive
on their commitments.
He was a careful driver
who stayed a mile or two under the speed limit,
and he liked to leave a little earlier than other people would.
But he never missed a turn or had to ask for directions,
and he always got the group to the meeting
on time.

Sometimes a newcomer would ask
why they had gone from Quincy to Brockton
by way of Neponset Circle—
there are back roads into Brockton, short cuts.
An old-timer would whisper, “Shhhh.
We know that that there are quicker ways.
But Charlie likes to drive.
And he can get us anywhere in the world—
as long as he starts from Neponset Circle.”

Most of us see the world as spiderweb,
all sorts of intricate connections,
alternate routes. A good sense of direction
and a roadmap and we’ll always find our way.
Charlie saw the world as a bicycle tire,

I knew a poet who would make
a couple hundred copies of a poem
and stick them in a pouch,
like a mailman
who wrote all the letters himself.

Saturday mornings
he would walk Commonwealth Avenue
from the Public Gardens
all the way to Kenmore Square.
He’d smile at everyone he met,
and offer each a poem.
Most people accepted them.

At Kenmore he would turn
and start back Commonwealth,
conscientious to retrace
the same side of that
gracious boulevard,
and he would reclaim his poems
from the sidewalks and the gutters
where they’d been discarded,

The cars I drive
don’t look like much I will admit,
but mostly they’ve got engines that won’t quit
this side of a nuclear explosion.

The Shitbox Mystique: when new friends
point at dents, concerned, and ask,
“What happened to your car?” I answer,
“It was like that
when I bought it.”

When I met Carol she was driving
a pretty good car,
except for the air-conditioner,
which used to make the engine overheat.
Carol also brought into my life
her son Seth and her mechanic, Peter—
that’s another feature
of the Mystique, your mechanic
becomes part of your family,
we see more of Peter than we do of Seth,
we invited him to our wedding—

for the martyrs of Tiananmen Square

The first generals ordered
to clear the square
refused and said,

“The people’s army
should not be used
against the people.”

Oh, the old chain-smokers
had other cards to play,
and it ended the way it seemed
that those things always would,
when men and women dreamed
too soon, too well—
crunch of truncheons, smell of
blood, the bucket in the
corner of the cell;
Masada and Spartacus,
Boston Massacre, Harper’s Ferry,
Warsaw ghetto,
Hungary, Prague,