There’s a blind spot in the human eye because between what the mind finally sees and the thing seen, reality gets interpreted.

Answering Carol: an open letter from the Margin

Sometimes my wife, Carol, will call my attention to a newspaper paragraph about a famous poet who has died in another country. She’ll read me a sentence about people weeping in the tavernas and reciting the poet’s work from memory. And she’ll ask me why this never happens in the United States.

For most of the twentieth century, the term ‘’American Poetry” came increasingly to refer to a branch of literature that Dana Gioia describes as “typographic,” to the exclusion of the auditory. The last twenty years, on the other hand, have seen a resurgence of the oral from several directions. Gioia cites cowboy poetry, slam poetry, rap, and hip-hop as disparate elements in a grass-roots movement subsumed under the more general term “spoken word.”

Genuinely new artistic developments … tend to move dialectically from the margins of established culture rather than smoothly from the central consensus. 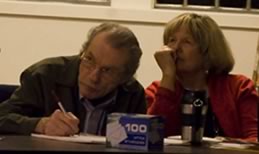 A gold prospector’s daughter from California, Carol relocated to Boston in 1987. She met Jack in 1989 by answering his personal ad. They married in 1991. Jack wrote often about Carol including “Car Talk” and in the poem “Neponset Circle.” Jack’s words from a Dedication, “For Carol and our Marriage in the Midst, if I could say here in one sentence what she has meant to me, all these poems would not have been necessary.”

Jack and Carol shared a vision to legitimize Spoken Word Poetry as a viable, respectable genre in the contemporary poetry world that is taken as seriously as page and academic poetry. They had a hope that someday Jack’s essays and poems would be included in a curriculum for MFA programs.

The first time I attended the Boston Poetry Slam, it was still at the Bookcellar, it hadn’t even moved to the Cantab Lounge yet. I brought a poem that night that I was really proud of. It was in rhyme and meter, and it was really clever, killer punchline. I still do it occasionally, and when I do it today, it works well.

But that night it didn’t work. I lost the audience halfway through. When I got to my final punchline, only about four people were still with me. One of them was Patricia Smith, and she gave me a good shout out. But for most of the audience, I was a waste of time.

A young guy followed me. He did a long, rambling monologue about hitch-hiking across the country. It was funny in places, it was touching, it was good; and it could just as easily have been a short essay as a poem. The audience loved it. Hell, for that matter, l loved it. But I was hurt. I thought, “Why do they like what he did so much more than what I did? What I did was so much more difficult.”

The answer that immediately flashed before my eyes, like those news bulletins that stream above Times Square, was, “So what? Audiences do not award any points for Degree of Difficulty.” What we do is not a diving competition.

How to deal convincingly with powerful emotions?

Bear in mind that everything I say is aimed at writing poems to be read out loud in front of an audience; the audience doesn’t have copies. The poets hold all the cards; they release information at their own time, in their own way.

Indirection
If you’re writing a poem about the death of a child, and you want the audience to experience some immediate emotion, the worst

Notes from the Poetry Underground

According to the legend, at that time Patricia was writing her poems out longhand on lined sheets; that when she read them to audiences and in competition, she was generally working from first drafts written in paragraph form—without line breaks.

I can personally testify that this particular legend is not far-fetched. Once, back around 1996, I qualified to go against Patricia head-to-head, best four out of seven, for the “Champion of Champions” title at what was then our home base, the Cantab Lounge in Central Square, Cambridge. She beat me 4-0 with one tie. To add to the indignity, her first four poems had been written that night, while sitting at the bar and emceeing the open mike. She wrote on yellow foolscap, and at one point I got a look over her shoulder; she wrote without line breaks.

The legend goes on to relate that although Patricia presumed no particular literary merit in her writing, she had a friend who recognized her unique talent. And that this friend borrowed her drafts, typed them up and submitted them to The Paris Review, which quickly accepted and published some or all of them.

I called Patricia to find out whether the legend was true. She told me there was a lot of truth in it, but that it was really a composite