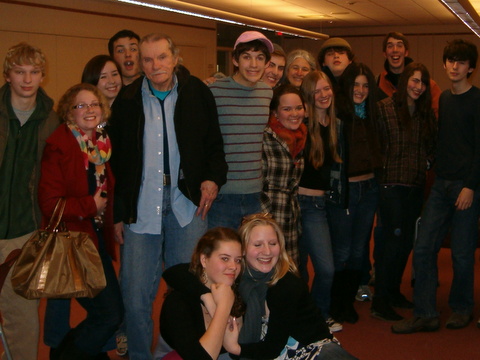 I want to welcome Debbie Szabo to the Standupoet website blog.  Whenever Jack planned an East Coast Poetry Tour, he always included a visit to Debbie Szabo’s Newburyport, MA, Poetry Soup creative writing group.  I have a special fondness for teachers because I taught special education for over twenty years.  A teacher can be a catalyst, a change agent who opens up a space in a student’s consciousness.  Debbie Szabo is that kind of teacher.  She  invites guest speakers to Poetry Soup— accomplished writers who act as mentors to the group.  Jack felt he was lucky to be chosen as one of those guest speakers.   —Carol McCarthy

When Carol called asking me to speak at Jack’s memorial service, I felt truly honored. When I realized her message asked me to keep it brief, though, I thought, “Hmm…how can anyone be brief when talking about Jack McCarthy.”  But I’ll do my best.

First I thought I might talk about how or when or where I first met Jack. But then I realized I had absolutely no recollection of our first meeting.  I think that’s because Jack was the kind of guy who made you feel once you met him, that he’d been part of your life forever…kind of like family.

I suppose I must have attended one of his poetry readings. I must have been impressed and gone up to him at the end and asked him if he’d be willing to read for my students at Newburyport High School and he must have said “yes,”   even though he had no idea who I was and I wasn’t offering him much of anything in return—just an opportunity to drive an hour north, share his poetry with a group of teenagers, and turn around and drive an hour back home.

My students adored Jack, who soon became an annual event at Poetry Soup, the name the kids gave to our monthly poetry readings.  Every year I would introduce Jack with the story of when I first heard his poem “The Walk of Life.” I had a habit of crying at every darned poem Jack read, but when he said this one had something to do with baseball, I told myself, “Ah, he won’t get me this time! I don’t even KNOW who Bill Buckner is!” But Jack’s poems were always about so much more than they seemed to be. By the time he got to the end of the poem, I was bawling…and not just the first time, but EVERY TIME I heard it. Even when I had the poem almost memorized and clearly knew what was coming, I’d still get teary. Sometimes the first line was enough to get me going. That’s how powerful his poetry was.

But it wasn’t just the fact that when Jack read, my students could watch their English teacher cry that drew them in. There was some other kind of magic. Jack’s whole being contradicted everything about adolescence: There my students sat—cynical, sarcastic, and snarky.  Unsure of themselves in the present moment and unsure that anything of value awaited them in the future. Then there was Jack: genuine, grateful and open. Completely willing to be who he was and offering all of himself to his audience.  It was as if by being HIMself, he gave my students license to be THEMselves, to speak their own truths—with humor to be sure, but always with honesty and integrity, acknowledging the mistakes we all inevitably make, but still appreciating what we have in the precious present moment.

My students loved Jack and he loved them. Even when he moved out west, he always made a point of letting me know when an East Coast tour was coming up, so he could feature at a Poetry Soup and he always drew the biggest crowds.

One of his most ardent admirers in Newburyport was my son Sam. I used to sneak him into Poetry Soup when he was in Middle School, so he had heard Jack quite a bit by the time he was in 7th grade. That was the year he decided to write a paper for his English teacher comparing Walt Whitman to Jack McCarthy. I think you can all guess who won. We sent a copy of Sam’s essay to Jack, who was so delighted that he quoted it on his Standupoetry updates, giving Sam his very first appearance on the internet with this quote:

“He reminds me of a drunken man in a bar full of snobs, who for
some inexplicable reason is always right.”—Sam Szabo, grade 7
Rupert A. Nock Middle School, Newburyport, MA

His English teacher must have wondered about twelve year old Sam’s experiences in bars full of snobs (as did his parents!) but he did ace the paper and give Jack a memorable quote for his archives.

I’d like to conclude with a confession – even though I’m a nice Jewish girl in a Unitarian Church! I’ve confessed it to my students, so I might as well make it public—even though my husband is here. I’ve always been a bit jealous of Jack’s wife Carol.  I don’t believe there is anyone on this planet who has been the recipient of more beautiful, heartfelt love poems than Carol…at least, I’m sure there is no one who has been compared to a busy rotary (round-about) and a stale “Little Debbie” cake and come out sounding like a goddess.

But that was Jack: Able to see love anywhere, able to find love anywhere, willing to bring love everywhere, literally from coast to coast. Newburyport High School’s poetry club will miss him dearly, as will everyone who was blessed to know him.